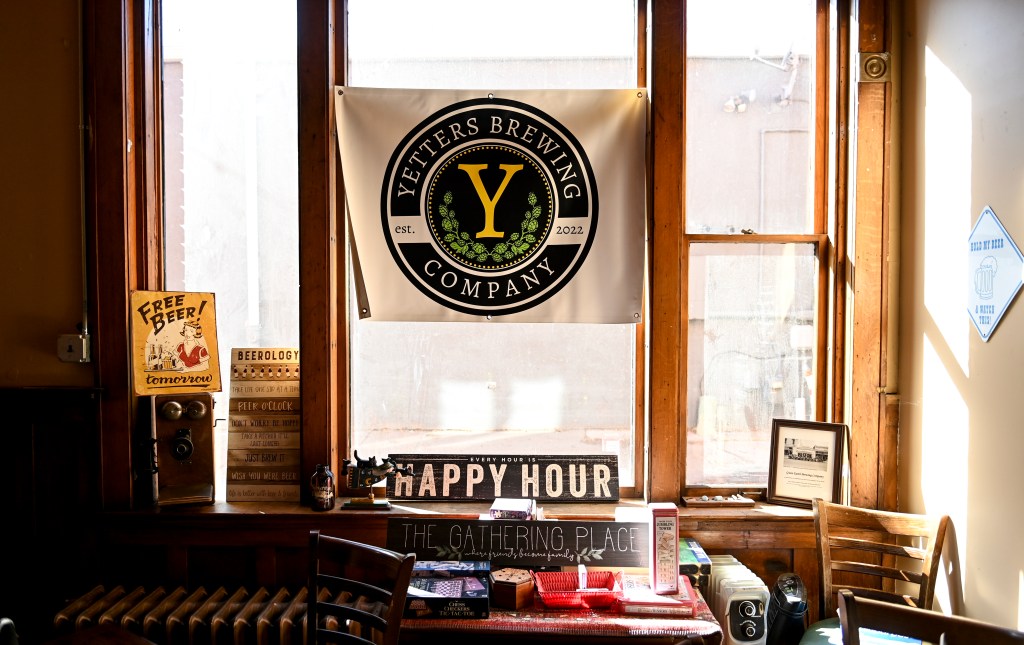 If you’re a fan of local breweries, you might have noticed that a favorite Greeley watering hole has gotten a new name: Yetters Brewing Company.

Formerly Green Earth Brewing Company, owners David and Terri Yetters along with their son, Dan Yetters, decided it was time to rebrand the brewery’s logo to something more aligned with their new owner. Green Earth opened in October 2017, the family took ownership in February 2022 and the rebranding took place last month.

“I worked for the previous owner for about a year and a half before buying it, and we wanted our own identity and for it to be ours,” Dan explained. “Green Earth was really Scott’s project, and we still have the same fundamental ideas as Scott — recycle, reuse, recover — and use local products. We continue this as much as we can. It’s our brewery now, so we wanted to put our name and identity there.

Although the name has changed, the family’s goal of making the brewery the ‘Cheers’ of Greeley remains the same.

“We are focused on making and serving the best beer possible and our brewery is very community driven. Almost everyone is a regular here and sits at the bar,” Dan said. “Trying to provide that community atmosphere where everyone gets along is important. You can talk about politics or baseball or whatever it is to make that community have a good time.

With the recent purchase of lager equipment, the family’s goal is to be better known as a lager house.

“That’s how we want to stand out,” Dan added.

Yetters offers beer to go in growlers so customers can enjoy a cold brew in the comfort of their home while watching a football game or sitting around the fire pit in the backyard on a chilly night.

Although they don’t offer food, customers are more than welcome to bring their own or order delivery from restaurants like Empire State Pizza and Roma Restaurant or from DoorDash and Grubhub.

The brewery is located at 725 10th St. and parking is available along the street as well as at the Greeley Train Depot at 902 7th Ave. – a short walk from Yetters.

Although Yetters is the family’s first brewery together, it’s not new territory for Dan.

“My last brewery was in Guatemala,” Dan said with a laugh. “I’ve been a home brewer since I was 21. The first beer I made spilled all over my mom’s kitchen.”

Being young and between jobs, Dan took a trip to Costa Rica to get a degree to teach English abroad.

“The same place I went to learn to teach English had a school in Guatemala and they asked me if I was going to go there,” he explained. “So I went and met these people who wanted to start a brewery in Guatemala. I knew how to do it and had been doing it for a long time, so I brewed with them for about a year and a half, then I met another guy and opened a brewery with him.

Not being a beer or brewing hub, Dan and his business partner had to source products and equipment from Mexico and Germany.

While breweries weren’t popular in the country, by the time Dan left Guatemala to return to the United States, there were “at least two taprooms and lots of different people brewing beer – at least 10 , I would say”.

Back in his hometown of Greeley, where his family has been rooted since 1868, Dan wanted to continue in the beer and brewing industry, hence his connection to Green Earth Brewing.

“I’ve been back here for about three years and it’s been a culture shock,” Dan said. “I miss food prices in Guatemala and the food was great. Guatemala has a unique style of cooking. They use a lot of chili peppers but they are all sweet or not spicy. Very different food, very different portion sizes, but Guatemala, the beauty of this country, the people, it was just amazing.

The brewing process from customer ‘mansplains’ to pro brewer: ‘Like I don’t know’