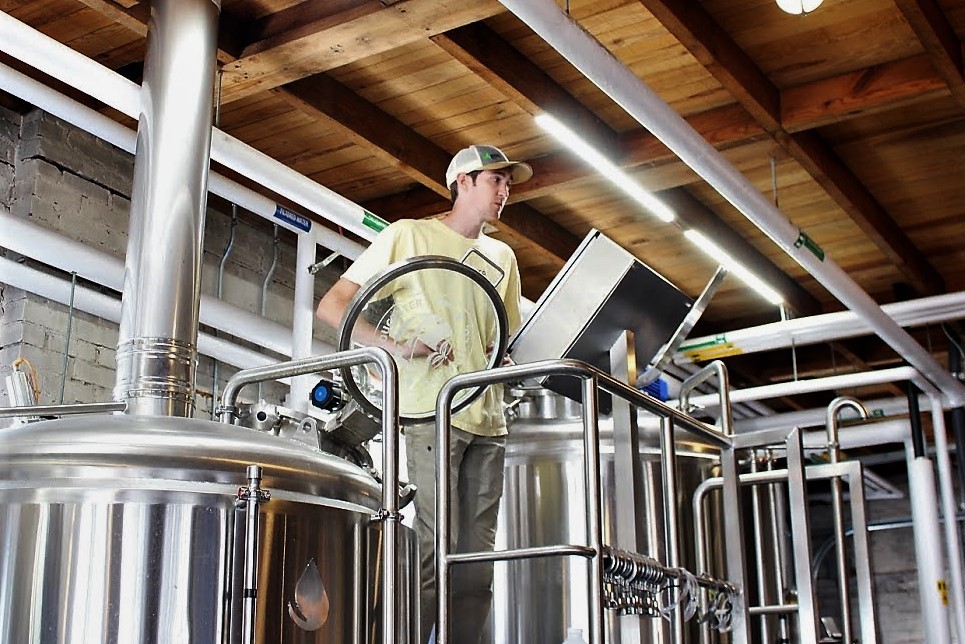 Gloucester Brewing Company: Building Community and Culture One Beer at a Time

GLOUCESTER – Inspiration to start a business can come from just about anywhere.

For Mike Brewer, former project manager at NASA-Langley, the inspiration to start Gloucester Brewing Company (GBC) came from a love of beer.

He was also drawn from an admiration for a building that sits on the corner of Main Street and John Clayton Memorial Road in downtown Gloucester.

For years, Mike drove past the 1920s red brick storefront; often pointing this out to his wife, Laura. He saw a lot of potential in the old building.

â€œIt used to be a small engine repair shop and it had been empty for a few years,â€ recalls Mike. â€œIt’s a beautiful building and I would say to Laura, ‘It would be a great brewery, wouldn’t it? “”

Laura, whose “official” title on the GBC website is listed as “the voice of reason,” reminded her husband that he doesn’t know how to brew beer.

Mike conceded that she was right. Fortunately, he knew a guy who had the “know-how”. Mike called his good friend, fellow NASA employee and longtime hobbyist beer maker Myron Ware.

Myron became a home brewer in the early 1990s when he purchased his first mail order beer kit. Over the years, he honed his skills and recipes in his garage, using his friends as a focus group.

â€œWhen you home brew, you spend about a year trying to make beer that people want to drink,â€ Myron said. “Then a year and a half before people start to say ‘oh now he’s brewing beer that we want to drink as opposed to half drinking. “

Mike saw the potential of Myron’s brewing skills and recipes and suggested that they try to open a brewery together.

With the support of their wives, the duo spent most of 2016 starting their business.

Mike researched localities that could support a brewery. He applied for the appropriate business licenses in Gloucester County and was able to secure a lease for the coveted Main Street building.

â€œGloucester County has been very supportive of us,â€ recalls Mike. â€œWe were able to take advantage of grants from the Gloucester Main Street Association and the Main Street Preservation Trust. The community has been a great support system.

Mike recruited his son, Michael, to help build the brewery’s website and launch its marketing campaign.

Myron easily recognized the big difference between home brewing and brewing for paying customers. He sought advice from alreadydyepermit craft brewers and followed them as they made large quantities of beer.

â€œIn the house brewing, you know how to make the recipes and the chemistry, â€Myron noted. “Switching to a seven-barrel system from 10 gallons is a whole different world.”

They hired contractors to transform the building, which is a former repair shop, into a brewery. Mike and Myron, who still worked in their full time jobs at NASA, worried about not being on site during construction.

Michael quit his job in Northern Virginia so he could act as Mike and Myron’s representative during construction.

When the GBC opened in 2018, Michael’s plan was to work at the bar and keep the books. However, he was often called upon to help Myron brew beer.

The more Michael brewed, the more he likedEdit. Before long he found himself quarterback the entire production process.

In the years since the opening of GBCs Portes, Mike, Myron and Michael have succeeded in building their business around good beer and know-howhe community.

With a blend of safe but tasty beers such as John Beere Cream Ale and Low Ground Brown Ale and more adventurous, push-envelope beers like the Flamingo Tide Session Ale and Better Than Roses Chocolate Cherry Stout, GBC has developed a wide range of beer fans.

Demand for GBC beer has grown so high that Michael doesn’t have enough space or equipment to follow. As a result, GBC entered into an agreement with St. George Brewery in Hampton to help brew ato store its most popular beers.

Mike notes that the trend in the craft beer industry is so that start-up breweries start immediately with on-site intervention taproom and outdoor distribution.

â€œThey are two totally different operations,â€ said Mike. â€œWe don’t distribute. We are barely able to follow into the reception hall, which is a good thing. “

The focus of the GBC management teams on their taproom paid off. On the opening days of the taproom, customers find a mixture of regulars and passers-by without anyone feeling out of place.

â€œPeople come here and sit in one place on a Monday night, grab their beer and enjoy it,â€ Mike said. â€œWe have local business people telling me they get clients by coming in, hanging out and meeting new people. It gives credit to the fact that we are a community hub. “

The Young Brewer examines GBC’s role in Gloucester from a historical perspective.

â€œSome of the best beers in the world are made in old breweries that don’t distribute them, mainly in Europe,â€ said Michael. â€œThey only sell it at home. It creates a destination. When I started here I wanted to get into distribution, but given the support and loyalty we’ve received from the community, I want us to have this type of little German village here in Gloucester County.

Always be informed. Click here to get the latest news and information delivered to your inbox