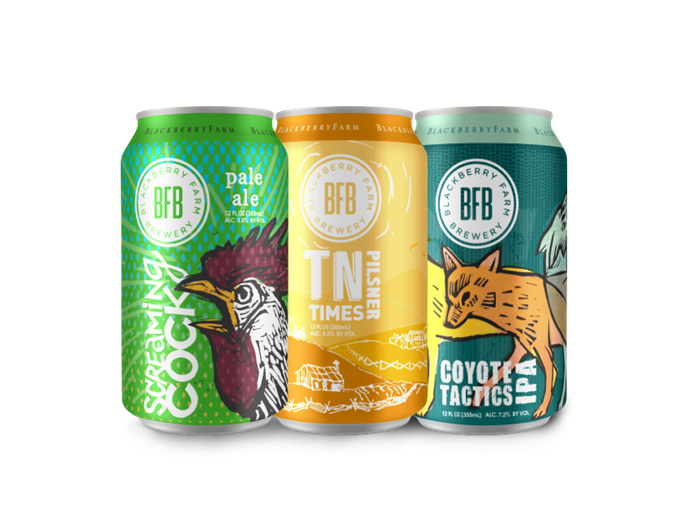 
Walland, Tennessee— Blackberry Farm Brewery has partnered with Brew Hub in Lakeland, Florida to launch a line of canned craft beers that launched in July 2017. While the brewery’s cork and cage bottles have been the hallmark of brand and a big hit in the craft beer market, the Canned beer range is designed to provide an ideal Blackberry Farm beer option for outdoor adventures, hanging out with friends and being there to enjoy. everyday moments.

Packaged in twelve-ounce cans, the initial launch consists of three new Blackberry Farm Brewery beers: Coyote Tactics IPA, TN Times Pilsner and Screaming Cock Pale Ale. Each can features a unique label created by Southern artists who have a relationship with Blackberry Farm. “Like the beers, we wanted each label to have its own personality,” said Roy Milner, fermentation manager for Blackberry Farm Brewery. “Working with artists familiar with the Blackberry Farm culture brings this project closer to the people we interact with at the Farm. We want the cans to be younger, bolder and in the moment. These new beers are meant to inspire recreation, connection and enjoyment of yourself and an active lifestyle.

After establishing itself as a quality producer in the world of craft beer, Blackberry Farm Brewery wanted to create a format that fit into more environments and gave more people access to its product. The can options appeal to a wider audience of craft beer drinkers and are a more playful addition to the Blackberry Farm Beer family. “We are incredibly excited to be working alongside the team at Brew Hub to begin offering our new line of canned beers. Their dedication to quality and attention to detail is second to none and reflects the same passion and care that has driven our own brewing program since day one. It’s a natural fit and an exciting new chapter for our brewery,” Roy said.

“We are thrilled to have Blackberry Farm Brewery as a partner and help them bring cans to the table for the first time,” said Tim Schoen, Founder and CEO of Brew Hub.

The cans will be available at bars, restaurants and grocery stores across Tennessee. For more information, contact Sarah Chabot at (865) 380-2626.

The Blackberry Farm Brewery team began producing beer in 2011, selling their products to Blackberry Farm customers and a few select restaurants in the Southeast. In response to increased demand, they moved to a larger production facility in Maryville, TN in 2015 and expanded distribution to 36 states. In keeping with the spirit of place at Blackberry Farm, brewing and processes are rooted in centuries-old traditions. Blackberry Farm Brewery respects centuries-old ways of making beer, while constantly pushing the boundaries to use modern techniques to enhance the complexity of their releases. To learn more, visit www.blackberryfarm.com/brewery

Brew Hub was founded in 2012 in St. Louis, MO by a team of beer industry executives and craft brewing experts led by Tim Schoen. “Where Craft Brewers Go To Grow”, Brew Hub provides comprehensive brewing, packaging, distribution and sales services for craft brands that are limited by capacity, geography or capital. The company’s first brewery is located in Lakeland, Florida. The company plans to have five breweries located across the country that will cater to craft brewers. Each facility will allow craft brewers to team up to brew their beers on site. Brew Hub’s financial sponsor is a private investment company, The Yucaipa Companies.