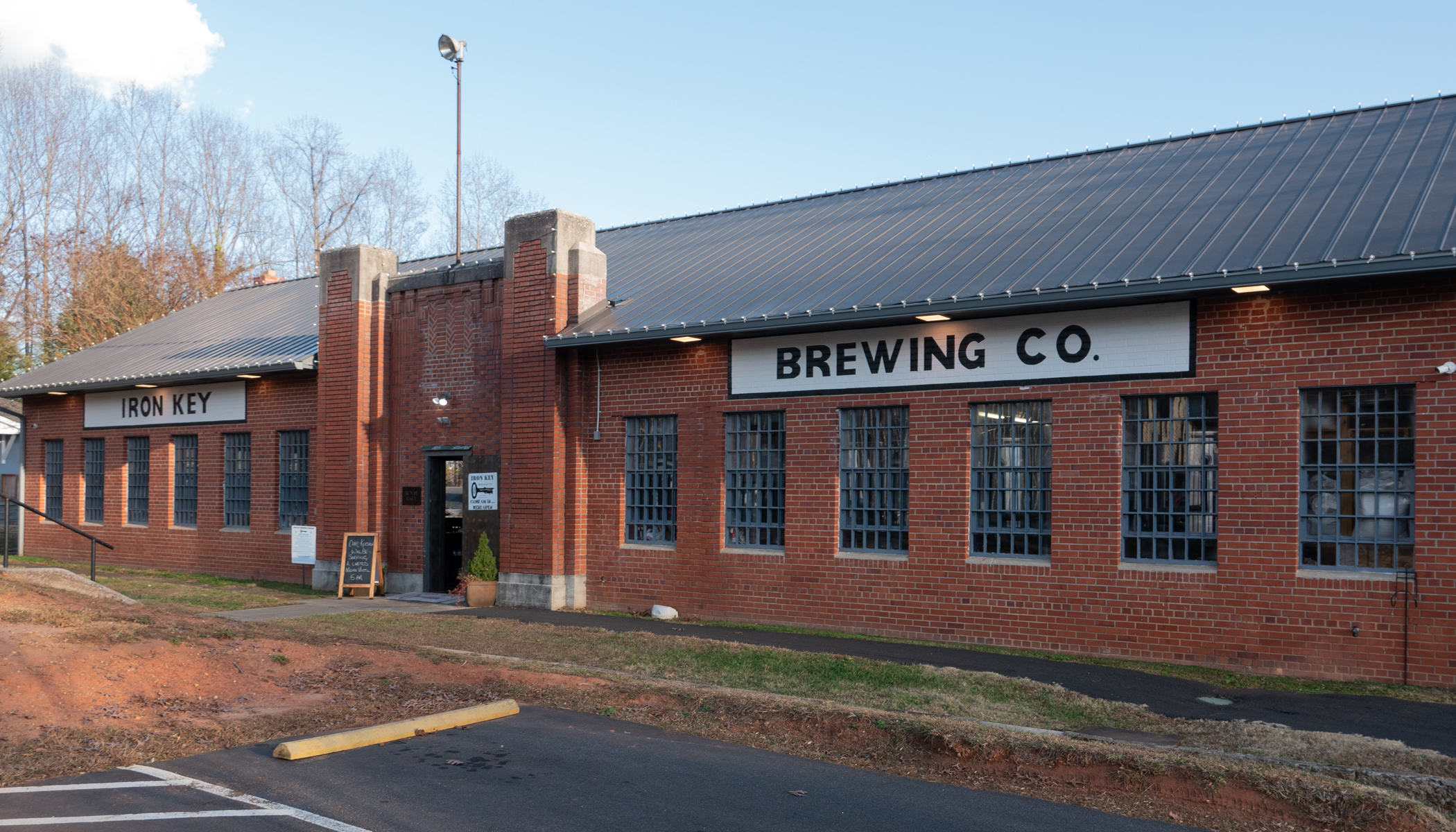 There aren’t many towns with a thousand inhabitants that have their own brewery. And probably no city has a brewery located like Iron Key Brewing Company. Longtime residents of Polk County know that this site on Locust Road was the former headquarters of the Polk County 4H organization for over 50 years. Many locals enjoyed the barbecue chicken dinners that 4H would sell as regular fundraisers and local youth benefited from the amazing programs on offer.

But born-and-bred Polk Countians might remember that before a lively group of children learned life skills at this site, the location was a bit more grim. It was much more worrying. The popular brewery now happily occupies the building that was once “The Big House” of what was once a North Carolina prison. Other buildings of the old prison complex remain. The dining hall and laundry buildings are behind the large house. And this grand house should not be confused with the famous University of Michigan football stadium. A few meters away is a small brick building that served as solitary confinement. A peek inside reveals a few cells that might remind you of a scene from one of the twelve prison films. Cool Hand Luke comes to mind. Look around and you’ll see remnants of the barbed wire fence, searchlights, and even an old guard tower barely visible in the woods surrounding their six and a half acres.

It takes visionary people to see how a prison transformed into a 4H center could be redeveloped into a brasserie and restaurant. Taphouse and Chief Operating Officer, Chris Balliew, had worked in the food and beverage industry for several years before becoming part of the original group of Iron Key founders. He and his friend Dave Erb, who is the Iron Key Brewmeister, had had the idea of ​​starting a brewery in their minds many times. The dream was there, but solving the myriad questions and obstacles seemed a bit daunting. Make this extremely terrific. But then business partners Bob and Deb Bundy got involved. The momentum picked up speed and it couldn’t be stopped and there was no turning back.

Chris recalls the day just a few years ago, standing behind the main building with Bob staring at a large puddle of mud. For Bob, this mud puddle was just a substitute for where he could consider setting up a large patio for outdoor dining. Bob could see tearing down the prison wall at this point and installing an oversized garage door to bring the inside out and vice versa. Within hours, Bob had drawn up plans for what would become Iron Key Brewing Company. Recently, Rodney and Julie Dofort teamed up to help drive the business forward. Rodney is managing partner.

Just about anyone in the food and beverage industry can tell you all the reasons not to open a restaurant, let alone a brewery. But the Iron Key Brewing team wasn’t going to give up until they gave it a chance. With Bob’s vision and the hard work of a dedicated and talented staff, the doors opened on August 14, 2020. The timing wasn’t the best. The Covid was then, as now, a major factor affecting everyone’s daily life. The restaurant, like most “non-essential” businesses, had to close a few times. And at Iron Key, that door is a heavy-gauge steel door that takes a massive key to lock it tightly. It didn’t stay locked for long.

Within a year and a half, Iron Key Brewing Company has already established itself as a popular restaurant and brewery. Like just about every other business, finding and keeping a workforce is crucial. Its not always easy. There were challenges and sometimes the restaurant had to change their menu to make everything work.

Iron Key is proud of his team. Everyone is at the center of business decisions, whether it’s discussing new menu items, choosing names for their beers and dishes (most of the names are very cleverly prison-themed) and to come up with ideas to improve everything. While each team member is often commissioned for a variety of tasks, the main tasks are divided. Amanda Bellew (no relation to Chris and her last name is spelled differently) helps drive business by serving as a social media specialist, including publishing a weekly newsletter. Amanda and Emily Costine handle ground operations which can include serving behind the bar, checking orders and canning a crowler (32 ounces of your favorite Iron Key beer) to go. Andrea Erb is the kitchen and office manager while Travis Bradshaw is the chef. And behind bars is where Dave Erb and Autumn Dawn work their Brewmeister magic. They have developed over a dozen unique beers that are available on any given visit. Iron Key also offers a few guest beers as well as their special mimosa of the month that the team has concocted and which is especially popular with customers who don’t like craft beer.

Iron Key has little advertising. They already have a steady stream of regulars who come not only from the immediate area, but from several neighboring counties. And it’s easy to spot license plates from three or four states in the parking lot. Parking can get full, but there is adjacent overflow parking for after hours. Future plans call for part of the property to be used for parking. Iron Key is always thinking of other ways to make its establishment even more welcoming. They offer one-dollar flights on Wednesday nights (one flight being your choice of four different four-ounce pours) and Tim Daniels hosts a lively Thursday night trivia game.

Iron Key also offers beer awareness activities. They are the only truly local brewery at Tryon Beer Fest. Brewer Dave Erb and Chris traveled to Emberglow Outdoor Resort in the community of Mill Spring to discuss home brewing and the art and science of beer making with campers. Andrea and Rodney opened their establishment on the first and third Saturday mornings during the cold months to host the Columbus Winter Farm Market.

The Iron Key team loves what they do. It shows from the moment you walk through those heavy doors. The word ‘guard’ may be printed on some staff t-shirts, but these staff members are there to make your confinement an enjoyable experience. And unlike the old prison that operated here for 25 years, you can get out whenever you want. But why would you?

A word from the Brewmeisters, Dave Erb & Autumn Dawn

From a brewing perspective, Iron Key focuses on German and American style ales and lagers.

Our flagship beers are the Saluda Road Pale Ale and the Big House IPA. Saluda Road is named after

inmates were housed there when it was a prison. Big House is named after the building in which it is brewed. Lockup Lager, Konjugal Kolsch and Dawg House Brown are also popular with inmates.

Factors to Consider Before Applying for a Consolidation Loan