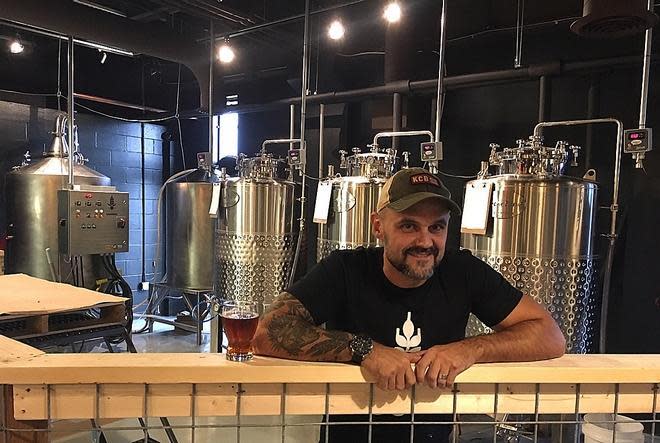 GALESBURG — The Knox County Brewery will soon close its doors permanently, the family owners of the local tavern have decided.

The company, which opened in 2018, offers food, craft beer, kombucha and soda with a community approach. Owner Matthew Hansen said despite the dining room’s success, the pandemic has slowed their customer numbers. After he and his wife Sarah Hansen were unable to secure a new location for the business, Hansen said the sale of the building they currently rented was a sign for the family to move on.

Hansen called the Knox County Brewing Company’s location — about a mile and a half from downtown Galesburg — inconvenient, but said it had never been an issue before the pandemic. Hansen said the location was originally a plus because it attracted the kind of customers they were trying to attract: people who were looking for the place instead of just stumbling upon it.

“At the end of 2019, we had to turn people away because we were maximizing our capacity,” Hansen said. “Things were going wonderfully, so we didn’t even have time to think. We were just playing catch-up all the time.

The pandemic reduced foot traffic at Knox Brewing Company, but it also allowed the family to slow down and assess what they wanted, Hansen said. They expanded the brewery menu and brewed a beer with 100% of the proceeds going to a community foundation to help those directly impacted by COVID.

However, with fewer customers there was also less profit for the charity. Additionally, Hansen said they wanted to be able to do more than write checks.

“So while we may have been in a bad location for other people, we were also a little bit out of place for ourselves,” Hansen said. “It didn’t allow us to really engage with the city and it was no one’s fault except just the distance and the location.”

Hansen said he and Sarah realized they would need to move to become the brewery they envisioned. The couple were considering a location near Innkeeper’s Coffee, but the building was purchased before they could bid. Before learning that the building in which they currently operate had been sold, the couple had already decided not to renew their lease.

Hansen said the couple started families and lived in Texas for more than 15 years before coming to Galesburg. After the brewery closed, Hansen said they were 95% sure they would come back to Texas and create something similar.

“I guess it’s good to leave a place when you’re on really good terms, but it’s also kind of weird because everyone’s on good terms,” ​​Hansen said. We have no regrets, we really appreciate that everyone gave us the chance they gave us and allowed this place to be what it was for us.”

This article originally appeared on Galesburg Register-Mail: The family-owned Galesburg craft brewery will close after the construction of its sold lease