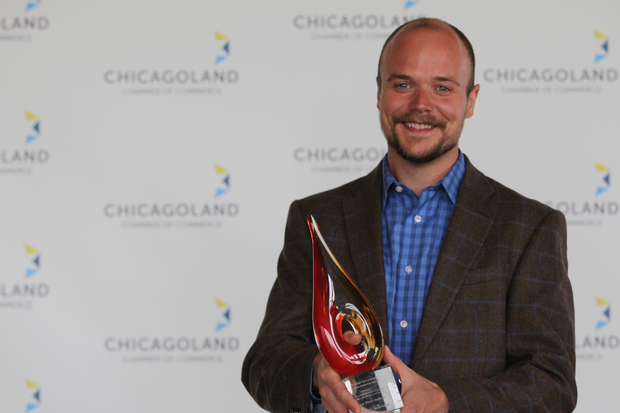 Byers, a Beverly native and resident, won the 2015 James Tyree Emerging Business Leadership Award from the Chicagoland Chamber of Commerce. The award was presented at the chamber’s annual meeting at Navy Pier.

Following the award presentation, the owner of the brewery at 10426 S. Western Ave. said he plans to use the profits to expand his brewery and explore distributing several seasonal beers.

The $50,000 expansion will require Byers to replace its five five-barrel brew tanks with 10-barrel tanks. The larger equipment will give Horse Thief Hollow around 1,000 casks a year to distribute.

The Southwest Side brewpub will likely focus on selling its popular fortnightly beers outside of the restaurant. These beers draw on the culinary expertise of Byers combined with the beer savvy of master brewer David Williams.

The duo is working on a Belgian beer that uses lemon zest and has won awards for its sweet potato beer and others. If beers take off, further expansion may be needed, Byers said.

As for the Chamber of Commerce prize, he was surprised to be named the winner on Tuesday morning. Byers was one of four finalists, one of whom was also a finalist on NBC’s “Shark Tank” and received an offer from famed judge Mark Cuban.

“I think what put me on top was the community involvement,” he said.

Indeed, Byers has lent the walls of his restaurant to local artists, including those involved with the Beverly Area Arts Alliance, transforming the brewery into a neighborhood art gallery.

He also made beer specials for the Beverly Breast Cancer Walk, Pat Mac’s Pack and others. Horse Thief Hollow then shares the proceeds from these beers with local charities.

“All of these things combined played a major role,” Byers said of the award, which recognizes a high-growth small business that “best represents the spirit and values ​​of Chicagoland’s late president and business leader, James Tyree”.

Byers was named the winner in a room full of more than 800 business leaders and executives as well as Mayor Rahm Emanuel.

Margot Burke Holland, executive director of the Beverly Area Planning Association, was among the hometown smiling faces in the crowd on Tuesday.

“Neil’s sincere belief in his business and his connection to the community is real. I think the committee got to see that and invested in Neil’s unique vision,” Holland said.