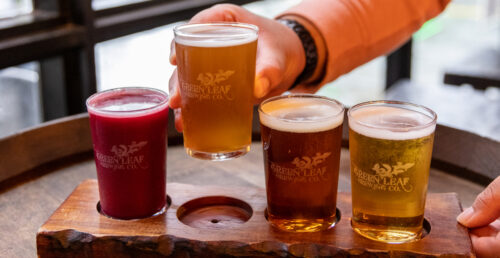 The brewery, which has been in operation since 2013, had a prime location at Lonsdale Quay with a waterside patio.

It specialized in microbreweries of beer, kombucha and ginger ale.

Green Leaf was at the forefront of BC’s microbrewery movement, opening up early in what would become a great beer boom.

It has yet to share the news on any of its social media channels or on its website, but in a note to Dished, Green Leaf confirmed it was “unfortunately forced to close by our landlord as he did not renew our lease”.

The owner of the brewery is Lonsdale Quay, which is currently “being revitalized”, according to its website.

Dished has contacted Quay North Urban Development, the company that owns and operates Lonsdale Quay Market, for comment on the closure of Green Leaf Brewing Company.

Taylor Mathiesen, president of Quay North Urban Development, offered a different version of the story, which contradicts the reason for Green Leaf’s closure.

Mathiesen had the following to say: “The statement provided by the brewery is not true. The landlord did not have the opportunity to discuss the terms of a renewal because the tenant had unresolved issues that prevented discussion. »

“The tenant chose to close the business of their own accord with the issues remaining unresolved. For the moment, the owner has not terminated the lease.

Dished will update this story as the closure is revealed.

Henderson Brewing Company Co-Founder Steve Himel talks about the art of craftsmanship, brewing for Honest Ed and launching a beer brand with Rush