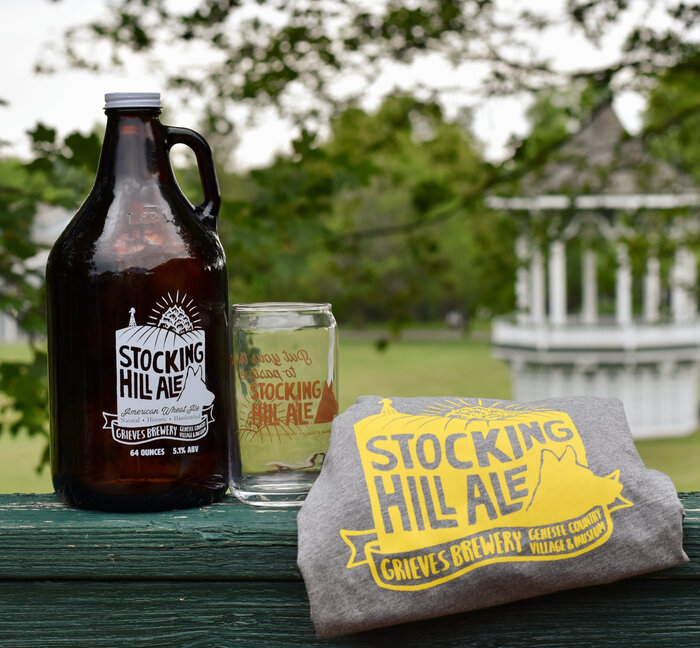 
Mumford, N.Y. – Genesee Country Village & Museum, located in Mumford, NY, partners with Rohrbach Brewing Company to produce the museum’s historic beers, which can be found on tap at GCV&M’s multiple restaurants and the Freight House Pub, part of an 1849 railway complex.

Genesee Country Village & Museum’s Stocking Hill Ale (American Wheat Ale) and Fat Ox Ale (American-Style Brown Ale) connect modern craft beer enthusiasts to the history of brewing in New York State. Found on tap at various locations around the museum grounds, both beers are brewed with reference to historic recipes from 19th century New York State. Rohrbach’s, one of Rochester’s original craft breweries, has locations in downtown Rochester on Railroad Street and Buffalo Road, and will support the brewing of the museum’s historic recipes and provide beer to the organization for the 2022 season and beyond. On occasion, beers can also be found on tap at Rohrbach establishments.

Stocking Hill Ale is an American wheat ale with ginger. It has a light hazy gold color with aromas of wheat and a bittersweet ginger finish. Fat Ox Ale has notes of dark chocolate and coffee, the aromas derived from roasted malts. In addition to Stocking Hill Ale and Fat Ox Ale, Museum visitors will also find seasonal draft beers from the Genesee Brewing Company, such as Ruby Red Kolsch in the spring and summer, as well as hard ciders from OSB Ciderworks .

Links to the craft beer community

Genesee Country Village & Museum has a historic connection to Rochester’s rich brewing scene. Its founder, John L. “Jack” Wehle, also served as president of the family business, the Genesee Brewing Company in Rochester, NY, which his father Louis Wehle purchased in 1932. Today, the president and chief management of the museum is Becky Wehle, granddaughter of Jack Wehle.

Museum visitors interested in learning more about the history of brewing in the region can visit Grieve’s Brewery on the museum grounds, a reconstruction from a c. 1803 Brasserie de Genève, NY. Genesee Country Village & Museum is the only museum in the United States to feature a working 19th century brewery. The theme of 1803

brewing demonstrations rely on gravity for much of the process, with liquids pumped by hand or ladled into troughs throughout the building. Parts of Rochester’s old Enright Brewery (closed in 1907) and an old wood-frame structure near West Bloomfield, NY, were amalgamated to form the current building. Next to the brewery, visitors will find a Hop House (built circa 1870 in Greece, NY), surrounded by a small hop farm. Hops grown at the museum are harvested in late summer during the annual Hop Harvest Festival, a celebration of craft beer and brewing history in the region.

Where to taste the beers

Craft beer enthusiasts looking to sample Stocking Hill Ale and Fat Ox Ale can find the beers on tap this season at the Genesee Country Village & Museum in the Freight House Pub, Depot Restaurant and Pavilion Garden Restaurant. Visitors can take home filled growlers and find branded craft beer products in the museum’s Flint Hill store. For those wishing to enjoy Rohrbach beers at GCV&M before the season opens on Saturday, May 7, the Museum’s annual Maple Sugar Festival and Pancake Breakfast (March 19, 20, 26 and 27) will put featured Rohrbach’s popular Griddle Cakes, a maple wheat and blueberry ale made with real maple syrup, available in both keg and can.

Several events throughout the year at GCV&M highlight craft beer and brewing history – namely, History on Tap (June 3) and the Hop Harvest Festival (September 10). Details of all upcoming events are available at www.gcv.org.

9 Types of Personal Loans to Meet Your Needs