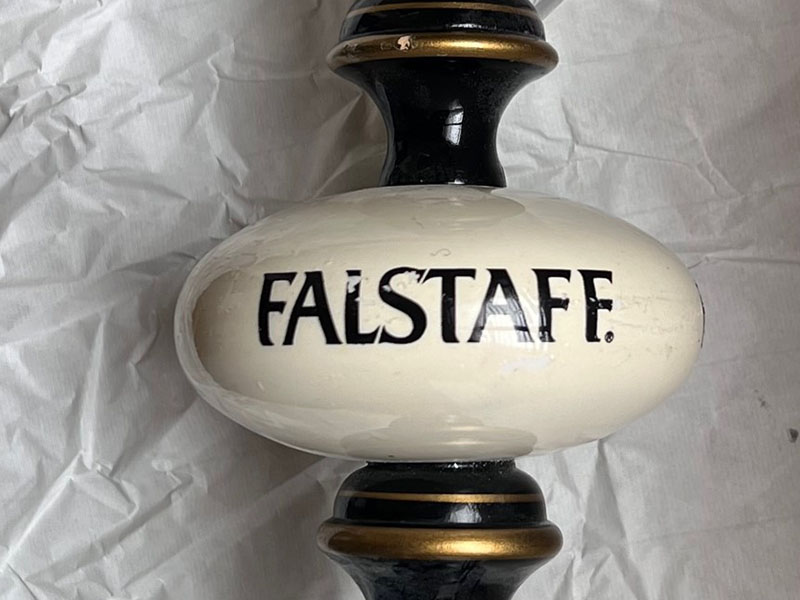 During the month of November, the Rosenberg Library exhibits Galveston beer memorabilia from the last century.

Unfortunately beer was often hard to find. Prior to the 1870s and 1880s, railroads were not as extensive in Texas, and beer had to be shipped from one of the major breweries in St. Louis down the Mississippi River, along the Texas coast, and into the port of Galveston. Consequently, transportation with horse-drawn wagons over rough, unpaved roads provided less than ideal conditions for shipping beer.

The high demand for beer in Texas and the challenges of transporting such long distances led St. Louis brewers Adolphus Busch (of Anheuser-Busch fame) and William Lemp to expand their brewing interests to Galveston. In 1893, the two partnered with several of Galveston’s wealthiest and most business-savvy citizens, including Bertrand Adoue and John and William Reymershoffer. The men raised the $400,000 in capital needed to form a company, purchase equipment, and build a state-of-the-art brewery on the island.

Galveston Brewing Company produced its first batch of beer in October 1896. A two-day grand public opening was held in February 1897. (The four-month delay was to allow proper aging of the beer.) The impressive complex of Romanesque-style brewery consisted of a large ice factory, brewery, warehouse, boiler room, wash house, shelving and wagon sheds. The factory also had railway tracks running along two sides. The beer was stored in adjacent cold rooms and loaded onto wagons so that the product could be transported to the continent for wider distribution. The Galveston Brewing Company was well equipped to brew 100,000 barrels of beer a year.

The original Galveston Brewing Company brew resembled a Munich-style light German beer that was popular in the warm southern climate. Containing only 3.5% alcohol, the beer was advertised as a medicinal tonic “particularly good for persons of nervous temperament and frequently prescribed by physicians”. The beers were sold under the “Seawall Bond” and “High Grade” product labels. The brewery was immediately successful and within ten years the facility had to be expanded to meet production requirements. The improvement included an ice factory with a daily output of 100 tons and a bottling plant with a capacity of 30,000 bottles per day. Eventually, over 100 men were employed at the factory.

With the repeal of Prohibition in 1934, the company was reorganized once more to become Galveston-Houston Breweries, Inc. after Southern Beverage merged with Magnolia Brewery in Houston. Under new ownership, it produced the “Southern Select” brand of beer. In 1955, Galveston-Houston Breweries was sold to St. Louis-based Falstaff Brewery. Falstaff continued operations in Galveston at the original site.

During the 1960s, Falstaff was the third largest American beer brewer with several plants nationwide. The company experienced a financial decline in the 1970s, which led to the closure of its Galveston plant in 1982. The last Falstaff brewery, located in Fort Wayne, Indiana, closed in 1990. The Falstaff brand is became the licensed property of Pabst Brewing. Company which continued its production until 2005 when sales were down sharply.

The treasure of the month is located on the historic second floor of the library near the east entrance. It can be consulted during normal library hours, from 9:00 a.m. to 5:45 p.m. Monday to Saturday and from 9:00 a.m. to 8:45 p.m. on Tuesdays and Thursdays. For more information, please contact Ivy Albright, Museum Curator at 409.763.8854 Ext. 125 or at [email protected]