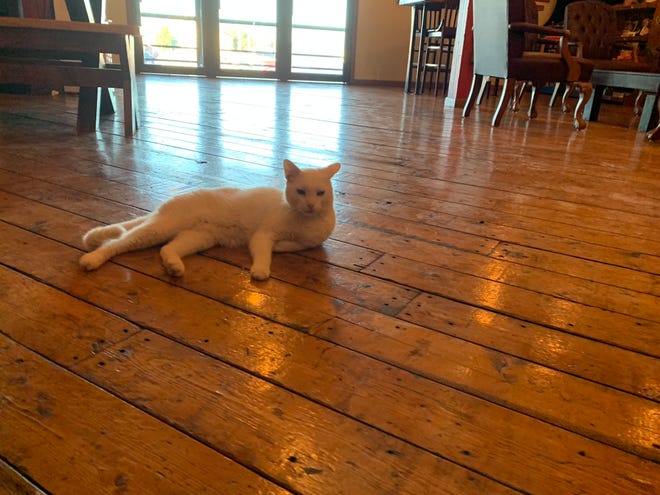 Tucked away steps from Fort Chaffee, in a white warehouse-like building, is Fort Smith’s first craft brewery since the 1990s.

Located at the end of a long drive off Fort Chaffe Boulevard, guests are greeted by large black letters indicating the “Fort Smith Brewing Co” building.

Once inside, BC, a beloved white house cat, often basks on the cedar-colored floors of the brewery, surrounded by beer-drinking people with names like George McGill Amber or Dat Nguyen Stout – including many are named after the famous Fort Smithians.

What was once an idea that floated in the early 2010s is now a staple in the community as it celebrates four years in business on Saturday.

From getting involved in local politics to learning the most appealing types of beer, Quentin Willard has learned more than he expected since the brewery opened with Brooke Elder, Micah Spahn and Brennan Nugent in 2017.

The brewery has a collection of such beers, including their light and crunchy Trailblazer IPA, sweet Raspberry Pale Ale, and refreshing, smooth Apricot Summer Kolsch. They also offer options for those with more robust taste buds, including the somber â€œBillâ€ Bradford’s Porter, the Summer Sour EP, and the brewery’s only stout named for Dat Nguyen.

â€œWe have a lot of other things for other people who are just trying to dive into it, to learn it,â€ Willard said. “I am very proud that we were able to offer a little something for everyone.”

For Fort Smith Brewing Co., it’s not just about delivering a good product.

As a new pastor in the area, Kurtz found the business while looking for a brewery to work with. He and a friend reached out to start Beer and Hymns, a business staple for years now.

â€œIt’s a wonderful place with a family atmosphere,â€ Kurtz said.

That connection became Pints â€‹â€‹with a Pastor night on the second Thursday of each month, where patrons can come and speak with Kurtz in an open and authentic way that they might not be able to do during a church service.

There is now a Pints â€‹â€‹with Priest event on the last Thursday of every month, Willard said.

â€œWe work with anyone really in the community who wants a voice or a space to share ideas,â€ said Willard.

For Andelyn Wright, who moved to Fort Smith when her husband was reassigned to 188 Wing about six years ago, the brewery has become a place to go after softball games or meet friends.

â€œThis is the environment that everyone is looking for,â€ Wright said. “This place where you can be with friends and know the owner.”

The welcoming spirit of the brewery extends to the community.

Last spring, the company hosted drive-through movie nights as a way for people to get out of the house safely during the onset of the pandemic.

â€œI really appreciated the way they went out of their way during the pandemic to provide ways to keep the community together,â€ Kurtz said.

With four years to its credit, the brewery has big plans for the future. Willard said they had recently started canning their products and hoped to expand into other areas as the craft beer scene in the River Valley grows.

As the brewery prepares to celebrate this Saturday and looks to the future, Willard said the hometown goal will remain the same.

â€œThe community will always be number one,â€ Willard said. â€œThis is where we have set up shop and we want to make sure that Fort Smith is successful and that [the] River Valley is a success. “

The Fort Smith Brewing Co. will celebrate this weekend with a â€œCheers and Beersâ€ event on Saturday.

From noon onwards, customers are invited to join the brewery for games, food and “obviously lots of good beer”.

Abbi Ross is the town’s reporter for the Southwest Times Record. She can be reached at aross @ swtimes or on Twitter at @__AbbiRoss