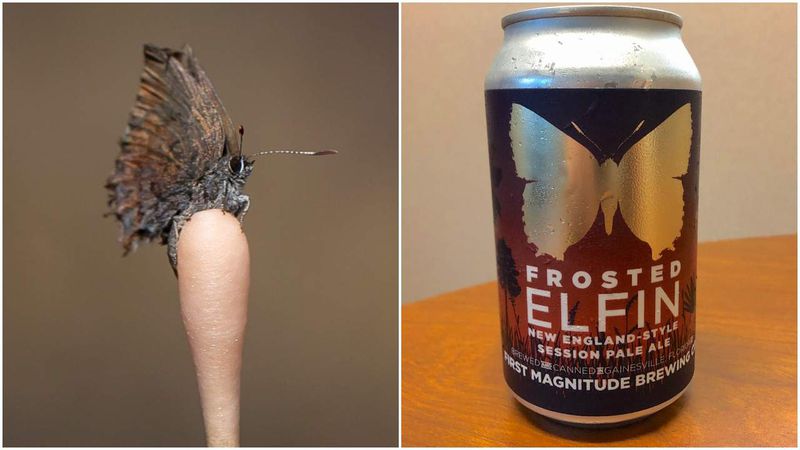 A small brown butterfly from Florida provided a key ingredient for a new conservation-conscious beer from First Magnitude Brewing in Gainesville.

The yeast for Frosted Elfin New England-Style Session Pale Ale comes from the bodies of frosted elves living in the Apalachicola National Forest. The butterflies once ranged from central Florida to Ontario, the US Fish & Wildlife Service said, but have declined nationwide due to habitat loss.

The beer was the result of a collaboration between the brewery and scientists at the Florida Museum of Natural History, who captured the butterflies and gently dabbed them for yeast before releasing them into the forest. These yeast samples were multiplied in Petri dishes to produce what was needed for brewing.

This flowery-smelling yeast was part of what resulted in a tropical, fruity, hoppy and hazy lager that went on sale in the First Magnitude tasting room on May 17 for $ 12.50 per pack of four. . Beer is also sold in some stores around Gainesville, including Lucky’s Market. The brewery will host another outing event at the Brass Tap in Tallahassee on May 25.

Jaret Daniels, a professor at the University of Florida and director of the museum’s Center for Lepidoptera and Biodiversity, told US Fish & Wildlife he’s looking for a way to involve a new demographic, especially beer drinkers, in the conversation.

A portion of the proceeds from each can goes directly to research on butterflies. Researchers also hope the exhibit raises awareness of the Frosted Elf.

Butterflies naturally collect yeast on their bodies from forest flora. In a press release posted to the museum’s website, Daniels noted that although the scientists were able to collect the yeast directly from the host plants, they believed that “it would be much cooler to remove it from the butterfly itself- same”.