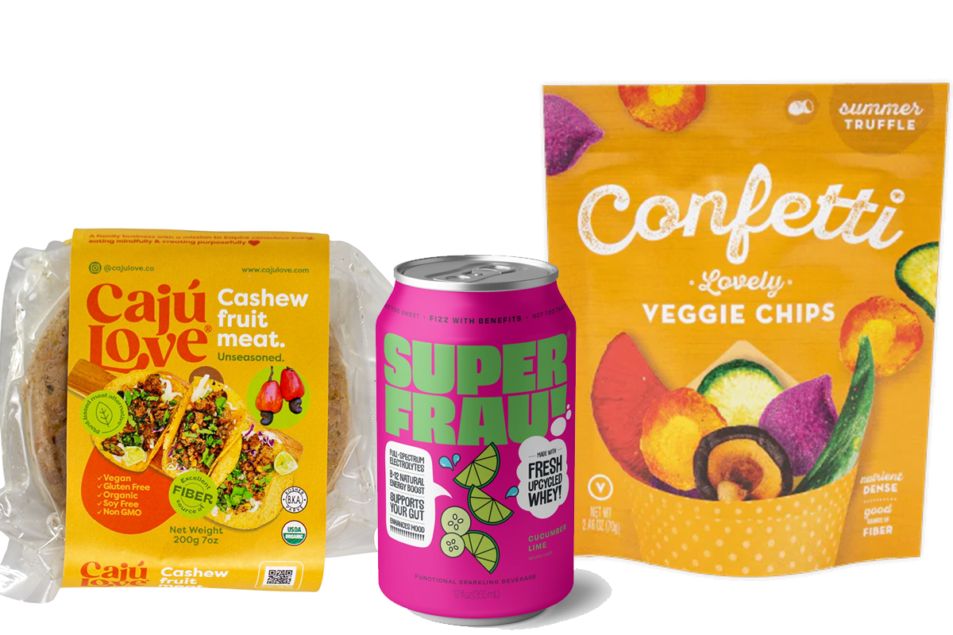 “As seen at Expo West ’22, the recycled food movement is yielding an impressive amount of innovation, driven by increased demand from consumers, retailers and the brands that serve them,” said Dan Kurzrock. , CEO and co-founder of Regrainé. “At the Upcycled Food Association’s flagship booth and in the hallowed halls of the show, products could be found for every category — powered by a diverse range of upcycled hero ingredients including cocoa fruit, whey, brew beans, coffee leaves, okara, juice pulp and more.

Cajú Love uses cashew apples, the fleshy stems of the plant that are often discarded, to make a fiber, mineral and protein-rich meat alternative, according to the company. The brand’s organic cashew meat is similar in texture to pulled chicken with a neutral flavor.

Several products featured at the show contain whey, the nutrient-rich liquid left over from yogurt production. According to the companies, The Spare Food Co. and Superfrau offer sparkling whey drinks that are high in protein and electrolytes. Wheyward Spirit, which produces a specialty distilled spirit made from whey, has collaborated with Ben & Jerry’s on a new ice cream flavor, Dublin Mudslide.

A few brands at Expo West launched products showcasing the unused parts of the coffee tree. Wize produces ready-to-drink tea from coffee leaves, which are high in antioxidants and produce a subtle caffeine effect with a mild, slightly sweet taste, according to the company. A sparkling energy drink featured at the show is made with cascara, the dried skin of coffee berries, and a juice drink is made using a process that retains the taste and nutrition of fresh coffee berries.

A pair of marks highlighted components of the cocoa fruit that are traditionally destined for landfill. CaPao, created by the SnackFutures business unit of Mondelez International, offers bites made from cocoa pulp, nuts, seeds and dried fruits. Blue Stripes Urban Cacao presented a collection of items using the fruity white husk and pulp. Blue Stripes’ cocoa water range is made from cocoa fruits and contains no added sugar.

According to the company, Rind Snacks is a brand of dried fruit products that contain the skin, which adds more nutrition and reduces food waste. At Expo West, the company shared a preview of its new line of orange flavored crisps launching later this year.

Vine to Bar introduced dark chocolate made with marc de chardonnay, a nutrient-rich and naturally sweet byproduct of winemaking. The Supplant Co. launched chocolate bars sweetened with fiber-derived sugars, made from parts of crops such as stems, straw and ears. Seven Sundays has launched breakfast cereals made from recycled sunflower seeds.

Less than a year ago, the Upcycled Food Association launched its certification mark to provide consumers with clear guidance on the presence of upcycled food ingredients in a range of products, including food and beverages, for pets, food supplements, etc. Research has shown that more than 50% of consumers had an increased intention to purchase certified recycled food when the brand was on the package.

“Today, achieving a circular food economy is more than a plausible reality…as a supplier of recycled ingredients and an innovation partner, we can literally taste it,” Kurzrock said. “Best of all, we’ve barely scratched the surface of what’s possible…so, as we like to say, forward and upward.”

Payday loans: your solution in the event of a financial crisis… but only as a last resort