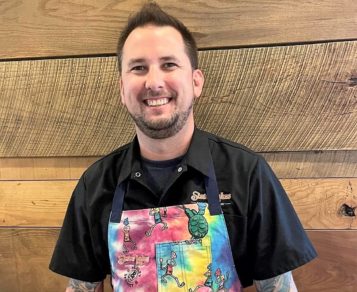 After making a name for himself at iconic Chicago restaurants, a local chef has returned to his childhood vacation spot to leave a permanent mark on the local culinary scene.

“He’s already brought a lot of great things to our home by creating a top-notch dining experience to accompany our great beer,” Morin said. “We’ve always been known for having great food, and Justin will put his own stamp on it and truly make it a foodie destination here in Sister Lakes.”

Paruzkiewicz is familiar with the dining experience, but Morin said the atmosphere at SLBC won’t change.

Morin said Paruzkiewicz has been involved in organizing the brewery’s town hall, an event space where he can showcase his culinary talents. Recently, the brewery recently hosted a farm-to-table dinner in the space, working with Benton Harbor Micro-Farm Sower’s Purse for a six-course meal paired with six beers from the tavern.

“If people want to do rehearsal dinners or other events where they want a fancy meal or a more formal experience, he has the ability, the experience and the knowledge to make that happen in this space,” said Morin said. “He’s going to build on what we’ve had and take it to new heights, that’s kind of the goal.”

Justin joins longtime employee and chef, Ashley Seeley, to lead SLBC’s culinary team. Discover the new menu for this summer hereor head to the bar to discover the specialties created by the culinary team.

Are debt consolidation loans a good idea? More Americans are wondering as the Fed hikes rates